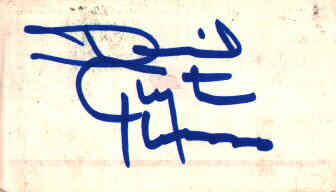 Born in Surrey, England, 1941 09 13, as David Henry Thomsett of British-Canadian parents. His mother Freda was an English war-bride with a musical theater background; his father Fred, a Canadian soldier, was away fighting in Italy.In 1944, David and his mother emigrated to Canada, Fred joined them a year later. David and his father didn't get along. Things got worse as David grew older. Their confrontations grew increasingly violent. Finally, barely fourteen, David left home for good. He soon got into truoble with the law and jailed a half-dozen times for vagrancy, Parole violations, petty theft. While other teenagers in suburban Toronto were attending high school proms, David was a street kid, a loner, sleeping in parked cars, stealing food and clothing, learning how to survive and fight behind bars. When he was at Millbrook Reformatory he learned to play the guitar. An old guitar had been left behind by an outgoing inmate, and David claimed it. He began to learn to play, practicing alone, late into the night, and for the first time in his life he had a dream, a plan for the future.

He left Millbrook in the spring of 1962, at the age of twenty-one, tough and determined, vowing never to return. He came to Toronto, to Yonge Street, a rough, brawling strip filled with sex shops and bars, hookers and hustlers of every kind. Rhythm and Blues was the music of choice on "the strip". It migrated up from Chicago and Detroit and was adopted by the musicians of Toronto. The king of "the strip" was Ronnie Hawkins. The Arkansas-born rocker and his band "The Hawks" ruled Yonge Street. David would hang around the clubs just for a chance to sit in with "The Hawks" or to sing the Blues with Robbie Robertson and Levon Helm. He began performing in Toronto night-clubs as Sonny Thomas. To put some distance between this new life and his past, he changed his name to David Clayton-Thomas.

Soon he was leading bands of his own. His first venture into the recording studio produced "Boom Boom", a John Lee Hooker blues which rode to number one locally.

His first group was Boom Boom, an r&b band in 1964. They changed their name to The Fabulous Shays. The members were: Fred Keeler, lead guitar, Scott richards, bass, John Netherell, drums and Ritchie Cates, rhythm guitar. The same year they recorded the single Barby Lee. He then wrote "Walk That Walk", which became a national hit, by then they had changed their name to David Clayton-Thomas and the Shays. After that he formed the Bossmen, one of the first rock bands to incorporate elements of jazz. Two of the members were keyboardplayer Tony Collacott and guitarist Jack Mowbray. They had a hit with "Brainwashed", also written by him, in the summer of 1966, featuring a rock guitar section with a jazz piano. Unfortunately, the bleeped language and music industry politics forced the guys from the scene, banned and blackballed. Numerous TV appearances and hundreds of club and concert dates followed, and David Clayton-Thomas was known across Canada.

He then formed the David Clayton-Thomas Combine, which also included jazz pianist Tony Collacott from the Bossmen, drummer Pat Little (from Luke and the Apostles) and bassist Peter Hodgson (from Jon and Lee and the Checkmates). Tony Collacott and guitarist Jack Mowbray from the Bossmen later formed another group "Chimo". In 1970 they recorded a Clayton-Thomas-song called "Quicksilver Woman".

Paul Anka, Canada's biggest international star, invited David to New York to guest NBC's "Hullabaloo". After this nationally televised appearance, David returned to Toronto. But New York had changed him forever. He took his band out of the lucrative bars on "the strip" and into the coffeehouses of New York. His band soon drifted away. But David hung in. The money was lean, but here David could play along side the great blues men he worshipped: John Lee Hooker, Lightnin' Sam Hopkins, Son House, Muddy Waters, Willie Dixon, Sonny Terry and Brownie McGee. John Lee Hooker took the young singer-guitarist into his band, and when he came to New York to play a Greenwich Village club, David came with him. When that gig ran out, Hooker left for Europe and David stayed on in the Village.

It was 1967, and the Village was a hotbed of creative activity. David roomed with other hungry young musicians, playing for pizza money, hanging out in all-night cafes, arguing music, politics and philosophy with the young active firebrands of the era, sharing gigs with Richie Havens , James Taylor and Jimi Hendrix, playing "basket houses", (play a few songs then pass the basket). Scuffling to survive was nothing new to David.

Word got around about the white blues player from Canada who sang and played with such conviction. Genuine stars began to show up wherever he played. At that time the original members of Blood, Sweat and Tears were fighting and some, including the original lead singer, Al Kooper, had left. One night folk singer Judy Collins dropped in and was deeply moved by the intensity of the young mans music. She told her friend Bobby Colomby about the experience, and the next night they returned together.

Clayton-Thomas was asked to join as lead singer. With the help of Clayton-Thomas, the band was reborn. Clayton-Thomas's first release with the band sold 10 million copies and became a blockbuster hit, it was the number one LP for seven straight weeks. It remained on the charts for more than two years. The album featured big band jazz-rock arrangements of old and new songs by such artists as Brenda Holloway, Billie Holiday, Laura Nyro, and Steve Winwood. The album launched three gold singles, "You've Made Me So Very Happy," "And When I Die" and "Spinning Wheel". He wrote the hit "Spinning Wheel". The album garnered five Grammy awards, including Album of the Year and Best Performance by a Male Vocalist.

Blood, Sweat and Tears 3, appearing a year later, was nearly as successful, introducing the hit singles "Hi-De-Ho" and "Lucretia MacEvil."

After releasing their fourth album. He left the band for a solo career.

The first release was an album simply called David Clayton-Thomas. It was recorded in New York with various session-musicians and produced by Bobby Colomby from B, S & T. It was recorded while he still was a member of the band.

He then formed his own band. The Sanctuary Band, named after one of the songs of his first soloalbum after leaving B,S&T, Magnificent Sanctuary Band. The band included organist William Smith, with whom he had worked together with in various bands in Canada 1963-1964. Other members of the band where Tessie Calderon, a female percussionist. Willie Weeks on bass, Spider Webb on drums and Kenny Marco on lead guitar. They recorded an album called "Tequila Sunrise". First they were going to call it "Yesterday's music", the title of one of the tracks. But the record company thought it might give the wrong idea and think it was something from Blood, Sweat & Tears. He entered the Rio de Janeiro Song Festival with "Nobody calls me prophet" one of the songs on the album, and won first price $16.000. The album is very much a singer-songwriter-album. Most of the tracks were written by Clayton-Thomas together with Willie Smith.

In the beginning of 1973 he signed a recordingcontract with RCA and began recording an album in April the same year. The album was released in July and the sound was more B,S&T oriented.

In 1974, just before returning to BS&T he recorded a few songs for RCA. One of them was called "Anytime, Babe" and was released as a single.

In the beginning of 1975 he returned to Blood, Sweat & Tears. They recorded New City. A very good album. Now the band was called Blood, Sweat & Tears featuring David Clayton-Thomas. The album wasn't the success it deserved to be. They released one more album on CBS before they were dropped. It was "More and more" a very laid back album. They released an album on ABC called "Brand new day". Here the sound was back to the original B,S&T sound. They continue to tour and personnel fluctuated. In January 1978 they were touring in Europe. After a concert in Amsterdam, Gregory Herbert took an overdose of cocaine and died. The band returned home and separated.

In late 1979 he reformed a new Canadian version of Blood, Sweat & Tears with fellow original member Bobby Economou, who played with the group until 1977 when he left to tour with Maynard Ferguson. Signed to MCA Records in 1980, the second incarnation of Blood, Sweat & Tears first album was called Nuclear Blues and featured cover versions of Jimi Hendrix's Manic Depression and Henry Glover's blues classic, Drown In My Own Tears. The band disbands late in 1980. David Clayton-Thomas went into a deep depression, that never left until his daughter, Ashleigh was born in 1982. I n the beginning of the eighties he was doin some was doing some work with Waylon Jennings. The result a countrysingle called "Some Hearts Get All the Breaks" came out in 1983. During this period he also recorded an album called "Home Fire", The album was never released, ". It included his versions of some oldies (Stubborn Kinda Fella, Johnny Cash's I Walk the Line and Born Under a Bad Sign). There was a reggae tune and some nicely done pop numbers too.

Yearning for a new start, the proud father of Ashleigh found the band a new manager in close friend Larry Dorr, formerly a tour manager with he band. Larry convinced David that there was still life in the once proud name Blood, Sweat & Tears, and that with the right musicians, good management, and strong leadership, it could once again be an attraction on concert stages around the world.

They recruited musical director/trumpeter Steve Guttman, graduate of Oberlin Conservatory of Music, former musical director for the 70's recording stars Gloria Gaynor and Evelyn "Champagne" King, and alumnus of the Tito Puente and Machito big bands, and he assembled an exciting lineup of top New York musicians. With Steve conducting, Blood, Sweat & Tears began performing with prestigious American symphonies like the Detroit, the Houston, and the Oklahoma City Symphony Orchestras.

Larry Dorr was right. A revitalized BS&T under his direction and David's leadership came storming back to the concert stages of the world, playing international jazz festivals, symphonies, concert halls and casino show rooms. The personnel of the band stabilized.

In late 1992 the promo single "Christmas Song" was released on Zoo Entertainment, SRC Records, BMG Entertainment Inc. It is the 1992 BS&T lineup playing on the CD.

In 1994 Leslie Mandoki, drummer from Hungary invited him and Blood Sweat & Tears hornsection: Jerry Sokolow - trumpet, Steve Guttman - trumpet, Tim Ries - Sax and Charlie Gordon - Trombone, together with Ian Anderson, Jack Bruce, Chakha Khan, Guru, Brecker Brothers, Bobby Kimball, Steve Lukhater, Nick Kershaw, Al di Meola, Mike Stern and some others to record with him. The album was called "People". David is singing in some of the numbers. In 1997 another album called "People in room no. 8" was released.

In 1996 David Clayton-Thomas was induced into the Canadian Music hall of Fame.

In 1996 he recorded an album that was called "The Uptown Album". It was recorded live at Ornette Coleman's Harlem studio. The album was renamed to "Blue Plate Special" and was produced by David himself. It was released in Canada in November 1997 and in the US and the rest of the world in January 1998. It's a collection of new original songs and classic blues tunes, it's the music he's always loved!.